NGC 602 is a young stellar cluster located in a peripheral region of the Small Magellanic Cloud (SMC) known as the wing. Far from the main body of the galaxy and abutting the Magellanic Bridge, the SMC's wing is characterized by low gas and stellar content. With deep optical imaging from the Advanced Camera for Surveys (ACS) aboard the Hubble Space Telescope (HST), we have discovered an extensive pre-main-sequence (PMS) population, with stellar masses in the range 0.6-3 Msolar. These low-mass PMS stars formed coevally with the central cluster about 4 Myr ago. Spitzer IRAC images of the same region also reveal a population of young stellar objects, some of which are still embedded in nebular material and most of which likely formed even more recently than the young stars detected with HST ACS imaging. We infer that star formation started in this region ~ 4 Myr ago with the formation of the central cluster and gradually propagated toward the outskirts where star formation is presently ongoing. 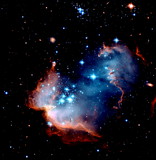