The Discovery of 1000 km s-1 Outflows in Massive Poststarburst Galaxies at z=0.6

Numerical simulations suggest that active galactic nuclei (AGNs) play an important role in the formation of early-type galaxies by expelling gas and dust in powerful galactic winds and quenching star formation. However, the existence of AGN feedback capable of halting galaxy-wide star formation has yet to be observationally confirmed. To investigate this question, we have obtained spectra of 14 poststarburst galaxies at z~0.6 to search for evidence of galactic winds. In 10/14 galaxies we detect Mg II λλ2796, 2803 absorption lines that are blueshifted by 490-2020 km s-1 with respect to the stars. The median blueshift is 1140 km s-1. We hypothesize that the outflowing gas represents a fossil galactic wind launched near the peak of the galaxy's activity, a few 100 Myr ago. The velocities we measure are intermediate between those of luminous starbursts and broad absorption line quasars, which suggests that feedback from an AGN may have played a role in expelling cool gas and shutting down star formation.

Observations reported here were obtained at the MMT Observatory, a joint facility of the University of Arizona and the Smithsonian Institution. 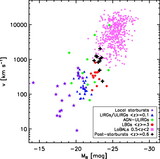