A Triple Main Sequence in the Globular Cluster NGC 2808

Accurate photometry with HST's ACS shows that the main sequence (MS) of the globular cluster NGC 2808 splits into three separate branches. The three MS branches may be associated with the complexities of the cluster's horizontal branch and of its abundance distribution. We attribute the MS branches to successive rounds of star formation, with different helium abundances; we discuss possible sources of helium enrichment. Some other massive globulars also appear to have complex populations; we compare them with NGC 2808.

Based on observations with the NASA/ESA Hubble Space Telescope, obtained at the Space Telescope Science Institute, which is operated by AURA, Inc., under NASA contract NAS 5-26555. 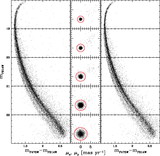