Is There Evidence for Flat Cores in the Halos of Dwarf Galaxies? The Case of NGC 3109 and NGC 6822

Two well-studied dwarf galaxies, NGC 3109 and NGC 6822, present some of the strongest observational support for a flat core at the center of galactic dark matter (DM) halos. We use detailed, cosmologically motivated numerical models to investigate the systematic effects and the accuracy of recovering parameters of the galaxies. Some of our models match the observed structure of the two galaxies remarkably well. Our analysis shows that the rotation curves of these two galaxies are instead quite compatible with their DM halos having steep cuspy density profiles. The rotation curves in our models are measured using standard observational techniques, projecting velocities along the line of sight of an imaginary observer and performing a tilted-ring analysis. The models reproduce the rotation curves of both galaxies and the disk surface brightness profiles, as well as the profile of isophotal ellipticity and position angle. The models are centrally dominated by baryons; however, the DM component is globally dominant. The simulated disk mass is marginally consistent with a stellar mass-to-light ratio, in agreement with the observed colors and the detected gaseous mass. We show that noncircular motions, combined with gas pressure support and projection effects, result in a large underestimation of the circular velocity in the central ~1 kpc region, creating the illusion of a constant-density core. Although the systematic effects mentioned above are stronger in barred systems, they are also present in axisymmetric disks. Our results strongly suggest that there is no contradiction between the observed rotation curves in dwarf galaxies and the cuspy central DM density profiles predicted by cold dark matter models. 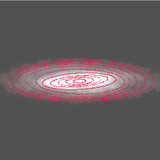