The Bulge-Halo Connection in Galaxies: A Physical Interpretation of the Vc-σ0 Relation

We explore the dependence of the ratio of a galaxy's maximum circular velocity, Vc, to its central velocity dispersion, σ0, on morphology or, equivalently, total light concentration. Such a dependence is expected if light traces the mass. Over the full range of galaxy types, masses, and brightnesses, and assuming that the gas velocity traces the circular velocity, we find that galaxies obey the relation log(Vc/σ0)=0.63-0.11C28, where C28=5log(r80/r20) and the radii are measured at 80% and 20% of the total light. Massive galaxies scatter about the Vc=sqrt(2)σ0 line for isothermal stellar systems. For pure disks, C28~2.8 and Vc~=2σ0. Self-consistent equilibrium galaxy models from Widrow & Dubinski constrained to match the size-luminosity and velocity-luminosity relations of disk galaxies fail to match the observed Vc/σ0 distribution. Furthermore, the matching of dynamical models for Vc(r)/σ(r) with observations of dwarf and elliptical galaxies suffers from limited radial coverage and relatively large error bars; for dwarf systems, however, kinematical measurements at the galaxy center and optical edge suggest Vc(Rmax)>~2σ0 [in contrast with past assumptions that Vc(Rmax)=sqrt(2)σ0 for dwarfs]. The Vc-σ0-C28 relation has direct implications for galaxy formation and dynamical models, galaxy scaling relations, the mass function of galaxies, and the links between the formation and evolution processes of a galaxy's central massive object, bulge, and dark matter halo. 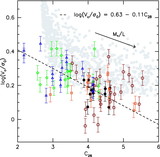