The Discovery of Cepheids and a Distance to NGC 5128

We discuss a new distance to NGC 5128 (Centaurus A) based on Cepheid variables observed with the Hubble Space Telescope. Twelve F555W (V) and six F814W (I) epochs of cosmic-ray-split WFPC2 observations were obtained. A total of 56 bona fide Cepheids were discovered, with periods ranging from 5 to ~50 days; five of these are likely Population II Cepheids of the W Virginis class, associated with the bulge or halo of NGC 5128. Based on the period and V- and I-band luminosities of a subsample of 42 classical (Population I) Cepheids, and adopting an LMC distance modulus and extinction of 18.50+/-0.10 mag and E(B-V)=0.10 mag, respectively, the true reddening-corrected distance modulus to NGC 5128 is μ0=27.67+/-0.12 (random)+/-0.16 (systematic) mag, corresponding to a distance of 3.42+/-0.18 (random)+/-0.25 (systematic) Mpc. The random uncertainty in the distance is dominated by the error on the assumed value for the ratio of total to selective absorption, RV, in NGC 5128, and by the possible metallicity dependence of the Cepheid period-luminosity relation at V and I. This represents the first determination of a Cepheid distance to an early-type galaxy.

Based on observations with the NASA/ESA Hubble Space Telescope obtained at the Space Telescope Science Institute, which is operated by the Association of Universities for Research in Astronomy, Inc., under NASA contract NAS 5-26555. 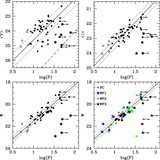