We show by means of a high-resolution N-body simulation how the mass assembly histories of galaxy-sized cold dark matter (CDM) halos depend on environment. Halos in high-density environments form earlier than those in low-density environments, and a higher fraction of their mass is assembled in major mergers. The distribution of the present-day specific mass aggregation rate is strongly dependent on environment. While in low-density environments only ~20% of the halos are not accreting mass at the present epoch, this fraction rises to ~80% at high densities. At z=1 the median of the specific aggregation rate is ~4 times larger than at z=0 and almost independent of environment. All the dependences on environment found here are critically enhanced by local processes associated with subhalos because the fraction of subhalos increases as the environment gets denser. The distribution of the halo specific mass aggregation rate and its dependence on environment resemble the relations for the specific star formation rate distribution of galaxies. An analog of the morphology-density relation is also present at the level of CDM halos, being driven by the halo major-merging history. Nevertheless, baryonic processes are necessary in order to explain further details and the evolution of the relations of star formation rate, color, and morphology to environment.

Publication:
The Astrophysical Journal
Pub Date:
January 2007
DOI:
10.1086/509706
arXiv:
arXiv:astro-ph/0606360
Bibcode:
2007ApJ...654...53M
Keywords:
E-Print:
To appear in The Astrophysical Journal (13 pages, 9 figures, in emulateapj style). After the Referee report, we added estimates of the accuracy in our measurement of the MAHs and introduced minor corrections to the manuscript 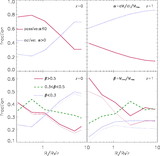