The Jovian Trojans likely formed beyond the snow line and so may contain considerable amounts of water ice. We seek near-infrared spectroscopic evidence for the 1.5 and 2.0 μm water ice bands in the Trojans. Our sample is focused on objects identified in previous measurements as being of special interest. The unusual Trojan (4709) Ennomos has a geometric albedo significantly above the mean Trojan albedo, perhaps because a recent impact has coated part of the surface with freshly excavated ice. Trojans (911) Agamemnon, (617) Patroclus, (1143) Odysseus, and (2797) Teucer were also observed. These objects have been independently reported to show possible weak absorptions at 1.7 and 2.3 μm, respectively. If real, the latter features may be due to organic materials present on the surfaces. However, all five targets appear spectrally featureless, even in our highest signal-to-noise ratio data. Simple models consisting of mixtures of water ice and a spectrally featureless material were used to quantify the limits to surface ice. 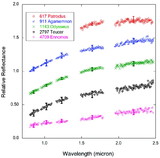