We present the culmination of our near-infrared survey of the optically spectroscopically identified white dwarf stars from the McCook and Sion catalog, conducted using photometric data from the Two Micron All Sky Survey final All Sky Data Release. The color selection technique, which identifies candidate binaries containing a white dwarf and a low-mass stellar (or substellar) companion via their distinctive locus in the near-infrared color-color diagram, is demonstrated to be simple to apply and to yield candidates with a high rate of subsequent confirmation. We recover 105 confirmed binaries, and identify 27 firm candidates (19 of which are new to this work) and 21 tentative candidates (17 of which are new to this work) from the 2MASS data. Only a small number of candidates from our survey have likely companion spectral types later than M5, none of which is an obvious L-type (i.e., potential brown dwarf) companion. Only one previously known white dwarf + brown dwarf binary is detected. This result is discussed in the context of the 2MASS detection limits, as well as other recent observational surveys that suggest a very low rate of formation (or survival) for binary stars with extreme mass ratios. 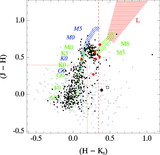