Multiple optical outflows are known to exist in the vicinity of the active star formation region called Orion South (Orion-S). We have mapped the velocity of low-ionization features in the brightest part of the Orion Nebula, including Orion-S, and imaged the entire nebula with the Hubble Space Telescope. These new data, combined with recent high-resolution radio maps of outflows from the Orion-S region, allow us to trace the origin of the optical outflows. It is confirmed that HH 625 arises from the blueshifted lobe of the CO outflow from 136-359 in Orion-S, while it is likely that HH 507 arises from the blueshifted lobe of the SiO outflow from the nearby source 135-356. It is likely that redshifted lobes are deflected within the photon-dominated region behind the optical nebula. This leads to a possible identification of a new large shock to the southwest of Orion-S as being driven by the redshifted CO outflow arising from 137-408. The distant object HH 400 is seen to have two even further components, and these all are probably linked to either HH 203, HH 204, or HH 528. Distant shocks on the west side of the nebula may be related to HH 269. The sources of multiple bright, blueshifted Herbig-Haro objects (HH 202, HH 203, HH 204, HH 269, and HH 528) remain unidentified, in spite of earlier claimed identifications. Some of this lack of identification may arise from the fact that deflection in radial velocity can also produce a change in direction in the plane of the sky. The best way to resolve this open question is through improved tangential velocities of low-ionization features arising where the outflows first break out into the ionized nebula. 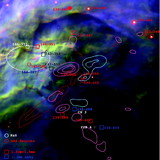