Spectra of the XA shock-cloud interaction region in the Cygnus Loop obtained with the Far Ultraviolet Spectroscopic Explorer (FUSE) are presented and analyzed. Several weak emission lines never before detected in the spectra of remnants are identified in a combined spectrum from four bright regions. The intensities of the silicon lines measured in this spectrum show that the 120-200 km s-1 shocks are present in the XA region and are effective at liberating silicon from grains. Differences among the spectra imply that the shocked gas has a complex ionization structure. The strongest lines in the spectra, and also the most uniformly distributed, are O VI λλ1032, 1038. Approximately 10% of the O VI emission from regions interior to the main shock interaction arises from coronal (million-degree) gas. Model calculations show that the shock at the boundary between the cloud and remnant has a velocity of about 180 km s-1 and has swept up a hydrogen column NH = 1.66 × 1018 cm-2, indicating that the blast wave encountered the cloud about 5000 years ago. The O VI line profiles imply that the boundary shock is dominated by a single broad component with an intrinsic velocity width parameter, b approx 48 km s-1, which is probably the result of bulk motions due to curvature of the shock front. Differences between the O VI velocity profiles of two regions separated by 20″ on the sky suggest the presence of a concentrated region of dust, which absorbs emission from the shock on the far side of the cloud.

Based on observations made with the NASA-CNES-CSA Far Ultraviolet Spectroscopic Explorer. FUSE is operated for NASA by The Johns Hopkins University under NASA contract NAS5-32985. 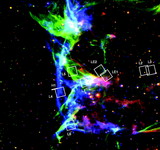