Past and Present Star Formation in the SMC: NGC 346 and its Neighborhood

In the quest to understand how star formation occurs and propagates in the low-metallicity environment of the Small Magellanic Cloud (SMC), we acquired deep F555W (~V) and F814W (~I) Hubble Space Telescope ACS images of the young and massive star-forming region NGC 346. These images and their photometric analysis provide us with a snapshot of the star formation history of the region. We find evidence for star formation extending from ~10 Gyr in the past until ~150 Myr in the field of the SMC. The youngest stellar population (~3+/-1 Myr) is associated with the NGC 346 cluster. It includes a rich component of low-mass pre-main-sequence stars mainly concentrated in a number of subclusters spatially colocated with CO clumps previously detected by Rubio and coworkers. Within our analysis uncertainties, these subclusters appear coeval with each other. The most massive stars appear concentrated in the central subclusters, indicating possible mass segregation. A number of embedded clusters are also observed. This finding, combined with the overall wealth of dust and gas, could imply that star formation is still active. An intermediate-age star cluster, BS 90, formed ~4.3+/-0.1 Gyr ago, is also present in the region. Thus, this region of the SMC has supported star formation with varying levels of intensity over much of the cosmic time. 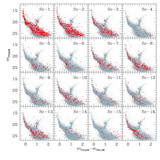