The Victoria-Regina Stellar Models: Evolutionary Tracks and Isochrones for a Wide Range in Mass and Metallicity that Allow for Empirically Constrained Amounts of Convective Core Overshooting

Seventy-two grids of stellar evolutionary tracks, along with the means to generate isochrones and luminosity/color functions from them, are presented in this investigation. Sixty of them extend (and encompass) the sets of models reported by VandenBerg et al. for 17 [Fe/H] values from -2.31 to -0.30 and α-element abundances corresponding to [α/Fe]=0.0, 0.3, and 0.6 (at each iron abundance) to the solar metallicity and to sufficiently high masses (up to ~2.2 Msolar) that isochrones may be computed for ages as low as 1 Gyr. The remaining grids contain tracks for masses from 0.4 to 4.0 Msolar and 12 [Fe/H] values between -0.60 and +0.49 (assuming solar metal-to-hydrogen number abundance ratios): in this case, isochrones may be calculated down to ~0.2 Gyr. The extent of convective core overshooting has been modeled using a parameterized version of the Roxburgh criterion, in which the value of the free parameter at a given mass and its dependence on mass have been determined from analyses of binary star data and the observed color-magnitude diagrams for several open clusters. Because the calculations reported herein satisfy many empirical constraints, they should provide useful probes into the properties of both simple and complex stellar populations.

All of the model grids may be obtained from the Canadian Astronomy Data Center (http://www.cadc-ccda.hia-iha.nrc-cnrc.gc.ca/cvo/community/VictoriaReginaModels/). Included in this archive are (1) the interpolation software (FORTRAN 77) to produce isochrones, isochrone probability functions, luminosity functions, and color functions, along with instructions on how to implement and use the software, (2) BVRI (VandenBerg & Clem 2003) and uvby (Clem et al. 2004) color-temperature relations, and (3) zero-age horizontal branch loci for all of the chemical compositions considered. 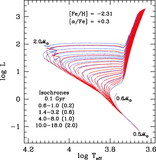