The Hydrogen-Burning Turnoff of RS Ophiuchi (2006)

We report a coordinated multiband photometry of the RS Oph 2006 outburst and highlight the emission-line-free y-band photometry that shows a midplateau phase at y~10.2 mag from day 40 to day 75 after the discovery, followed by a sharp drop of the final decline. Such midplateau phases are observed in other two recurrent novae, U Sco and CI Aql, and are interpreted as a bright disk irradiated by the white dwarf. We have calculated theoretical light curves based on the optically thick wind theory and have reproduced the observed light curves, including the midplateau phase and the final sharp decline. This final decline is identified with the end of steady hydrogen shell burning, which turned out at about day 80. This turnoff date is consistent with the end of a supersoft X-ray phase observed with Swift. Our model suggests a white dwarf mass of 1.35+/-0.01 Msolar, which indicates that RS Oph is a progenitor of Type Ia supernovae. We strongly recommend the y-filter observation of novae to detect both the presence of a disk and the hydrogen burning turnoff. 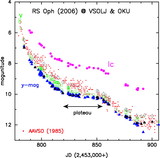