Galaxies in SDSS and DEEP2: A Quiet Life on the Blue Sequence?

In the six billion years between redshifts z=1 and z=0.1, galaxies change due to the aging of their stellar populations, the formation of new stars, and mergers with other galaxies. Here I explore the relative importance of these various effects, finding that mergers and other processes are unlikely to convert more than 10% of the blue galaxy sequence into red galaxies in that time period. I compare the galaxy population at redshift z~0.1 from the Sloan Digital Sky Survey (SDSS) to the sample at z~1 from the Deep Extragalactic Evolutionary Probe 2 (DEEP2). Galaxies are bluer at z~1: the blue sequence by about 0.3 mag and the red sequence by about 0.1 mag in 0.1(u-g). I evaluate the change in color and in the luminosity functions of the two sequences using some simplistic stellar population synthesis models. These models indicate that the luminous end of the red sequence fades less than passive evolution allows by about 0.2 mag. Due to a lack of luminous blue progenitors, ``dry'' mergers between red galaxies then must create the luminous red population at z~0.1 if the stellar population models and flux estimates are correct. The blue-sequence colors and luminosity function are consistent with a reduction in the star formation rate since z~1 (by at least a factor of about 3, although this study does not constrain the exact number well), with no change in the number density to within 10%. These results restrict the number of blue galaxies that can fall onto the red sequence by any process, and in particular suggest that if mergers are catastrophic events, they must be rare for blue galaxies. 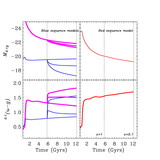