Cosmological Parameters from the 2003 Flight of BOOMERANG

We present the cosmological parameters from the CMB intensity and polarization power spectra of the 2003 Antarctic flight of the BOOMERANG telescope. The BOOMERANG data alone constrain the parameters of the ΛCDM model remarkably well and are consistent with constraints from a multiexperiment combined CMB data set. We add LSS data from the 2dF and SDSS redshift surveys to the combined CMB data set and test several extensions to the standard model including running of the spectral index, curvature, tensor modes, the effect of massive neutrinos, and an effective equation of state for dark energy. We also include an analysis of constraints to a model that allows a CDM isocurvature admixture. 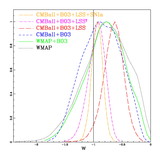