Supernova Fallback: A Possible Site for the r-Process

The conditions for the leading r-process site candidate, neutrino-driven winds, cannot be reproduced self-consistently in current supernova models. For that reason, we investigate an alternate model involving the mass ejected by fallback in a supernova explosion, through hydrodynamic and nucleosynthesis calculations. The nucleosynthetic products of this ejected material produce r-process elements, including those in the vicinity of the elusive third peak at mass number 195. Trans-iron element production beyond the second peak is made possible by a rapid (<1 ms) freezeout of α-particles that leaves behind a large nucleon (including protons!) to r-process seed ratio. This rapid phase is followed by a relatively long (>~15 ms) simmering phase at ~2×109 K, which is the thermodynamic consequence of the hydrodynamic trajectory of the turbulent flows in the fallback outburst. During the slow phase, high-mass elements beyond the second peak are first made through rapid capture of both protons and neutrons. The flow stays close to the valley of stability during this phase. After freezeout of protons the remaining neutrons cause a shift out to short-lived isotopes, as is typical for the r-process. A low electron fraction is not required in this model; however, the detailed final distribution is sensitive to the electron fraction. Our simulations suggest that supernova fallback is a viable alternative scenario for the r-process. 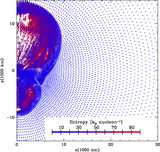