We suggest that the mass lost during the evolution of very massive stars may be dominated by optically thick, continuum-driven outbursts or explosions, instead of by steady line-driven winds. In order for a massive star to become a Wolf-Rayet star, it must shed its hydrogen envelope, but new estimates of the effects of clumping in winds from O-type stars indicate that line driving is vastly insufficient. We discuss massive stars above roughly 40-50 Msolar, which do not become red supergiants and for which the best alternative is mass loss during brief eruptions of luminous blue variables (LBVs). Our clearest example of this phenomenon is the 19th century outburst of η Carinae, when the star shed 12-20 Msolar or more in less than a decade. Other examples are circumstellar nebulae of LBVs and LBV candidates, extragalactic η Car analogs (the so-called supernova impostors), and massive shells around supernovae and gamma-ray bursters. We do not yet fully understand what triggers LBV outbursts or what supplies their energy, but they occur nonetheless, and they present a fundamental mystery in stellar astrophysics. Since line opacity from metals becomes too saturated, the extreme mass loss probably arises from a continuum-driven wind or a hydrodynamic explosion, both of which are insensitive to metallicity. As such, eruptive mass loss could have played a pivotal role in the evolution and ultimate fate of massive metal-poor stars in the early universe. If they occur in these Population III stars, such eruptions would also profoundly affect the chemical yield and types of remnants from early supernovae and hypernovae thought to be the origin of long gamma-ray bursts. 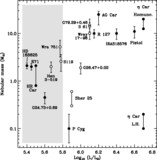