The rapid succession of discoveries of short-duration hard-spectrum gamma-ray bursts (GRBs) has led to unprecedented insights into the energetics of the explosion and nature of the progenitors. Yet short of the detection of a smoking gun, such as a burst of coincident gravitational radiation or a Li-Paczyński minisupernova, it is unlikely that a definitive claim can be made for the progenitors. As was the case with long-duration soft-spectrum GRBs, however, the expectation is that a systematic study of the hosts and locations of short GRBs could begin to yield fundamental clues as to their nature. We present an aggregate study of the host galaxies of short-duration hard-spectrum GRBs. In particular, we present the Gemini-North and Keck discovery spectra of the galaxies that hosted three short GRBs and a moderate-resolution (R~6000) spectrum of a fourth host. We find that these short-hard GRBs originate in a variety of low-redshift (z<1) environments that differ substantially from those of long-soft GRBs, both on individual galaxy scales and on galaxy-cluster scales. Specifically, three of the bursts are found to be associated with old and massive galaxies with no current (<0.1 Msolar yr-1) or recent star formation. Two of these galaxies are located within a cluster environment. These observations support an origin from the merger of compact stellar remnants, such as double neutron stars or a neutron star-black hole binary. The fourth event, in contrast, occurred within a dwarf galaxy with a star formation rate exceeding 0.3 Msolar yr-1. Therefore, it appears that like supernovae of Type Ia, the progenitors of short-hard bursts are created in all galaxy types, suggesting a corresponding class with a wide distribution of delay times between formation and explosion. 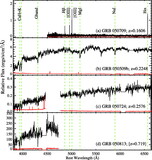