We report the discovery of a rich population of low-mass stars in the young, massive NGC 346 star-forming region in the Small Magellanic Cloud from deep V, I, and Hα images taken with the Hubble Space Telescope Advanced Camera for Surveys. These stars have likely formed together with the NGC 346 cluster, ~=3-5 Myr ago. Their magnitudes and colors are those of pre-main-sequence stars in the mass range 0.6-3 Msolar, mostly concentrated in the main cluster, but with secondary subclusters spread over a region across ~45 pc. These subclusters appear to be spatially coincident with previously known knots of molecular gas identified in ground-based and Infrared Space Observatory observations. We show that NGC 346 is a complex region, being shaped by its massive stars, and the observations presented here represent a key step toward the understanding of how star formation occurred and has progressed in this low-metallicity environment.

Based on observations made with the NASA/ESA Hubble Space Telescope, obtained at the Space Telescope Science Institute, which is operated by the Association of Universities for Research in Astronomy, Inc., under NASA contract NAS 5-26555. 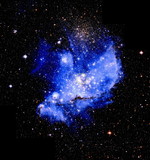