The H II Region of the First Star

Simulations predict that the first stars in a ΛCDM universe formed at redshifts z>20 in minihalos with masses of about 106 Msolar. We have studied their radiative feedback by simulating the propagation of ionization fronts (I-fronts) created by these first Population III stars (M*=15-500 Msolar) at z=20, within the density field of a cosmological simulation of primordial star formation, outward through the host minihalo and into the surrounding gas. A three-dimensional ray-tracing calculation tracks the I-front once the H II region evolves a ``champagne flow'' inside the minihalo, after the early D-type I-front detaches from the shock and runs ahead, becoming R type. We take account of the hydrodynamic back-reaction by an approximate model of the central wind. We find that the escape fraction of ionizing radiation from the host halo increases with stellar mass, with 0.7<~fesc<~0.9 for 80<~M*/Msolar<~500. To quantify the ionizing efficiency of these stars as they begin cosmic reionization, we find that for M*>~80 Msolar, the ratio of gas mass ionized to stellar mass is ~60,000, roughly half the number of ionizing photons released per stellar baryon. Nearby minihalos are shown to trap the I-front, so their centers remain neutral. This is contrary to the recent suggestion that these stars would trigger formation of a second generation by fully ionizing neighboring minihalos, stimulating H2 formation in their cores. Finally, we discuss how the evacuation of gas from the host halo reduces the growth and luminosity of ``miniquasars'' that may form from black hole remnants of the first stars. 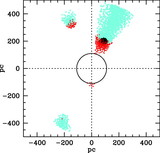