We describe observational evidence for a new kind of interacting binary star outburst that involves both an accretion instability and an increase in thermonuclear shell burning on the surface of an accreting white dwarf. We refer to this new type of eruption as a combination nova. In late 2000, the prototypical symbiotic star Z Andromedae brightened by roughly 2 mag in the optical. We observed the outburst in the radio with the VLA and MERLIN, in the optical both photometrically and spectroscopically, in the far-ultraviolet with FUSE, and in the X-rays with both Chandra and XMM-Newton. The 2 year long event had three distinct stages. During the first stage, the optical rise closely resembled an earlier, small outburst that was caused by an accretion disk instability. In the second stage, the hot component ejected an optically thick shell of material. In the third stage, the shell cleared to reveal a white dwarf whose luminosity remained on the order of 104 Lsolar for approximately 1 yr. The eruption was thus too energetic to have been powered by accretion alone. We propose that the initial burst of accretion was large enough to trigger enhanced nuclear burning on the surface of the white dwarf and the ejection of an optically thick shell of material. This outburst therefore combined elements of both a dwarf nova and a classical nova. Our results have implications for the long-standing problem of producing shell flashes with short recurrence times on low-mass white dwarfs in symbiotic stars. 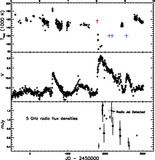