Based on the long-term radial velocity surveys carried out with the McDonald Observatory 2.7 m Harlan J. Smith Telescope from 1988 to the present, we derive upper limits to long-period giant planet companions for 31 nearby stars. Data from three phases of the McDonald Observatory 2.7 m planet-search program have been merged together, and for 17 objects data from the pioneering Canada-France-Hawaii Telescope radial velocity program have also been included in the companion-limits determination. For those 17 objects, the baseline of observations is in excess of 23 yr, enabling the detection or exclusion of giant planets in orbits beyond 8 AU. We also consider the possibility of eccentric orbits in our computations. At an orbital separation of 5.2 AU, we can exclude on average planets of Msini>~(2.0+/-1.1)MJ (e=0) and Msini>~(4.0+/-2.8)MJ (e=0.6) for 25 of the 31 stars in this survey. However, we are not yet able to rule out ``true Jupiters,'' i.e., planets of Msini~1MJ in 5.2 AU orbits. These limits are of interest for the Space Interferometry Mission, Terrestrial Planet Finder, and Darwin missions, which will search for terrestrial planets orbiting nearby stars, many of which are included in this work. 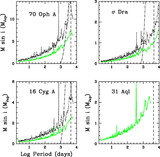