We present a uniform catalog of stellar properties for 1040 nearby F, G, and K stars that have been observed by the Keck, Lick, and AAT planet search programs. Fitting observed echelle spectra with synthetic spectra yielded effective temperature, surface gravity, metallicity, projected rotational velocity, and abundances of the elements Na, Si, Ti, Fe, and Ni, for every star in the catalog. Combining V-band photometry and Hipparcos parallaxes with a bolometric correction based on the spectroscopic results yielded stellar luminosity, radius, and mass. Interpolating Yonsei-Yale isochrones to the luminosity, effective temperature, metallicity, and α-element enhancement of each star yielded a theoretical mass, radius, gravity, and age range for most stars in the catalog. Automated tools provide uniform results and make analysis of such a large sample practical. Our analysis method differs from traditional abundance analyses in that we fit the observed spectrum directly, rather than trying to match equivalent widths, and we determine effective temperature and surface gravity from the spectrum itself, rather than adopting values based on measured photometry or parallax. As part of our analysis, we determined a new relationship between macroturbulence and effective temperature on the main sequence. Detailed error analysis revealed small systematic offsets with respect to the Sun and spurious abundance trends as a function of effective temperature that would be inobvious in smaller samples. We attempted to remove these errors by applying empirical corrections, achieving a precision per spectrum of 44 K in effective temperature, 0.03 dex in metallicity, 0.06 dex in the logarithm of gravity, and 0.5 km s-1 in projected rotational velocity. Comparisons with previous studies show only small discrepancies. Our spectroscopically determined masses have a median fractional precision of 15%, but they are systematically 10% higher than masses obtained by interpolating isochrones. Our spectroscopic radii have a median fractional precision of 3%. Our ages from isochrones have a precision that varies dramatically with location in the Hertzsprung-Russell diagram. We plan to extend the catalog by applying our automated analysis technique to other large stellar samples. 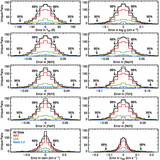