We report the discovery of multiple two-dimensional rings in the quadrupolar planetary nebula NGC 6881. As many as four pairs of rings are seen in the bipolar lobes, and three rings are seen in the central torus. While the rings in the lobes have the same axis as one pair of the bipolar lobes, the inner rings are aligned with the other pair. The two pairs of bipolar lobes are likely to be carved out by two separate high-velocity outflows from the circumstellar material left over from the asymptotic giant branch (AGB) wind. The two-dimensional rings could be the results of dynamical instabilities or the consequence of a fast outflow interacting with remnants of discrete AGB circumstellar shells. 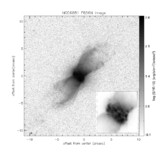