When the source in a four-image gravitational lens system lies sufficiently close to a ``fold'' caustic, two of the lensed images lie very close together. If the lens potential is smooth on the scale of the separation between the two close images, the difference between their fluxes should approximately vanish, Rfold≡(F+-F-)/(F++F-)~0. (The subscript indicates the image parity.) Violations of this ``fold relation'' in observed lenses are thought to indicate the presence of structure on scales smaller than the separation between the close images. We present a detailed study of the fold relation in realistic smooth lenses, finding it to be more subtle and rich than was previously realized. The degree to which Rfold can differ from zero for smooth lenses depends not only on the distance of the source from the caustic, but also on its location along the caustic, and then on the angular structure of the lens potential (ellipticity, multipole modes, and external shear). Since the source position is unobservable, it is impossible to say from Rfold alone whether the flux ratios in an observed lens are anomalous or not. Instead, we must consider the full distribution of Rfold values that can be obtained from smooth lens potentials that reproduce the separation d1 between the two close images and the distance d2 to the next nearest image. (By reducing the image configuration to these two numbers, we limit our model dependence and obtain a generic analysis.) We show that the generic features of this distribution can be understood, which means that the fold relation provides a robust probe of small-scale structure in lens galaxies. We then compute the full distribution using Monte Carlo simulations of realistic smooth lenses. Comparing these predictions with the data, we find that five of the 12 known lenses with fold configurations have flux ratio anomalies: B0712+472, SDSS 0924+0219, PG 1115+080, B1555+375, and B1933+503. Combining this with our previous analysis revealing anomalies in three of the four known lenses with cusp configurations, we conclude that at least half (8/16) of all four-image lenses that admit generic, local analyses exhibit flux ratio anomalies. The fold and cusp relations do not reveal the nature of the implied small-scale structure, but do provide the formal foundation for substructure studies, and also indicate which lenses deserve further study. Although our focus is on close pairs of images, we show that the fold relation can be used-with great care-to analyze all image pairs in all 22 known four-image lenses and reveal lenses with some sort of interesting structure. 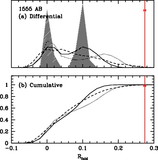