We present dynamical models for the massive globular cluster G1. The goal is to measure or place a significant upper limit on the mass of any central black hole. Whether or not globular clusters contain central massive black holes has important consequences for a variety of studies. We use new kinematic data obtained with Keck and new photometry from the Hubble Space Telescope (HST). The Keck spectra allow us to obtain kinematics out to large radii that are required to pin down the mass-to-light ratio of the dynamical model and the orbital structure. The HST observations give us a factor of 2 better spatial resolution for the surface brightness profile. By fitting nonparametric, spherical, isotropic models, we find a best-fit black hole mass of 1.7(+/-0.3)×104 Msolar. Fully general axisymmetric orbit-based models give similar results, with a black hole mass of 1.8(+/-0.5)×104 Msolar. The no-black-hole model has Δχ2=5 (marginalized over mass-to-light ratio), implying less than 3% significance. We have taken into account any change in the mass-to-light ratio in the center due to stellar remnants. These results are consistent with our previous estimate and inconsistent with the analysis of Baumgardt et al., who claim that G1 does not show evidence for a black hole. These new results make G1 the best example of a cluster that contains an intermediate-mass black hole.

Based on observations made with the Hubble Space Telescope, which is operated by AURA, Inc., under NASA contract NAS 5-26555. 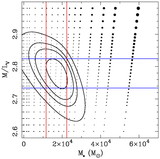