We report the discovery of a several-Jupiter-mass planetary companion to the primary lens star in microlensing event OGLE-2005-BLG-071. Precise (<~1%) photometry at the peak of the event yields an extremely high signal-to-noise ratio detection of a deviation from the light curve expected from an isolated lens. The planetary character of this deviation is easily and unambiguously discernible from the gross features of the light curve. Detailed modeling yields a tightly constrained planet-star mass ratio of q=mp/M=0.0071+/-0.0003. This is the second robust detection of a planet with microlensing, demonstrating that the technique itself is viable and that planets are not rare in the systems probed by microlensing, which typically lie several kiloparsecs toward the Galactic center. 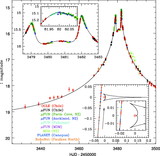