The Low End of the Supermassive Black Hole Mass Function: Constraining the Mass of a Nuclear Black Hole in NGC 205 via Stellar Kinematics

Hubble Space Telescope (HST) images and spectra of the nucleated dwarf elliptical galaxy NGC 205 are combined with three-integral axisymmetric dynamical models to constrain the mass MBH of a putative nuclear black hole. This is only the second attempt, after M33, to use resolved stellar kinematics to search for a nuclear black hole with mass below 106 solar masses. We are unable to identify a best-fit value of MBH in NGC 205; however, the data impose a upper limit of 2.2×104 Msolar (1 σ confidence) and an upper limit of 3.8×104 Msolar (3 σ confidence). This upper limit is consistent with the extrapolation of the MBH-σ relation to the MBH<106 Msolar regime. If we assume that NGC 205 and M33 both contain nuclear black holes, the upper limits on MBH in the two galaxies imply a slope of ~5.5 or greater for the MBH-σ relation. We use our three-integral models to evaluate the relaxation time and stellar collision time in NGC 205; Tr is ~108 yr or less in the nucleus, and Tcoll~1011 yr. The low value of Tr is consistent with core collapse having already occurred, but we are unable to draw conclusions from nuclear morphology about the presence or absence of a massive black hole. 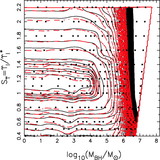