In the course of a search for common proper-motion binaries in the Jones & Walker (JW) catalog of proper motions in the Orion Nebula Cluster, we came across several faint stars with proper motions larger than 1" per century and probabilities of membership P larger than 0.90. Such stars are interesting because they could be low-mass runaway stars recently accelerated by n-body interactions in compact multiple systems. Of particular interest among these stars is JW 451, which has a P = 0.98, the largest transverse velocity among all the stars with P>=0.5 ( 69+/-38 km s-1), and a proper-motion vector suggesting that it was accelerated by the θ1 Orionis C triple system some 1000 years ago. A closer examination of those JW stars with μ>1'' per century revealed that two other stars, JW 349 and JW 355 (with transverse velocities of 38+/-9 and 90+/-9 km s-1, respectively), in spite of being listed with P = 0 by JW, should also be considered part of the cluster, because these objects are also externally ionized proplyds. In fact, Hillenbrand assigns to them probabilities of membership of 0.99. Moreover, the proper-motion errors of these two stars are relatively small, and so they are good candidates to be runaway stars recently accelerated in the Orion Nebula Cluster. 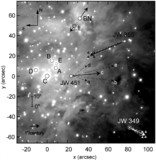