We investigate the connection between globular clusters and ultracompact dwarf galaxies (UCDs) by examining the properties of 10 compact, high-luminosity (-11.8 MV -10.8) objects associated with M87 (NGC 4486, VCC 1316), the cD galaxy in the Virgo Cluster. These objects, most of which were previously classified as M87 globular clusters, were selected from a combination of ground- and space-based imaging surveys. Our observational database for these objects - which we term DGTOs, or "dwarf-globular transition objects" - includes Advanced Camera for Surveys (ACS) F475W and F850LP imaging from the ACS Virgo Cluster Survey, integrated-light spectroscopy from Keck/ESI, and archival F606W WFPC2 imaging. We also present a search for DGTOs associated with other galaxies based on ACS imaging for 100 early-type galaxies in Virgo. Our main findings can be summarized as follows:

1. Of the six DGTOs in M87 with both ground-based spectroscopy and HST imaging, we find two objects to have half-light radii, velocity dispersions, and mass-to-light ratios that are consistent with the predictions of population synthesis models for old, metal-rich, high-luminosity globular clusters. 2. Three other DGTOs are much larger, with half-light radii rh ~ 20 pc, and have V-band mass-to-light ratios in the range 6 M/LV 9. These objects, which we consider to be UCDs, resemble the nuclei of nucleated dwarf elliptical galaxies in the Virgo Cluster, having similar mass-to-light ratios, luminosities, and colors. 3. The classification of the sixth object is more uncertain, but it bears a strong resemblance to simulated "stellar superclusters," which are presumed to form through the amalgamation of multiple young massive clusters. 4. In general, the UCDs in M87 are found to follow the extrapolated scaling relations of galaxies more closely than those of globular clusters. There appears to be a transition between the two types of stellar systems at a mass of 2 × 10^6 M. We suggest that the presence of dark matter is the fundamental property distinguishing globular clusters from UCDs. 5. We identify a sample of 13 DGTO candidates from the complete ACS Virgo Cluster Survey, selecting on the basis of half-light radius, magnitude, and color. For a number of these objects, membership in Virgo can be established through radial velocities or surface brightness fluctuation measurements with our ACS images. Three of these DGTO candidates are embedded in low-surface brightness envelopes. 6. Five of the 13 DGTOs in Virgo are associated with a single galaxy: M87. This finding suggests that proximity to the Virgo center may be of critical importance for the formation of these objects, although we find M87 to be more abundant in DGTOs than would be expected on the basis of its luminosity, the size of its globular cluster system, or the local galaxy density. These results show that distinguishing bona fide UCDs from high-luminosity globular clusters requires a careful analysis of their detailed structural and dynamical properties, particularly their mass-to-light ratios. In general, the properties of the UCDs in our sample are consistent with models in which these objects form through tidal stripping of nucleated dwarf galaxies. Based on observations with the NASA/ESA Hubble Space Telescope obtained at the Space Telescope Science Institute, which is operated by the association of Universities for Research in Astronomy, Inc., under NASA contract NAS 5-26555. 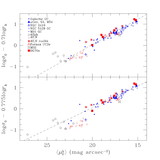