The Lifetimes and Evolution of Molecular Cloud Cores

We discuss the lifetimes and evolution of clumps and cores formed as turbulent density fluctuations in nearly isothermal molecular clouds. In order to maintain a broad perspective, we consider both the magnetic and nonmagnetic cases. In the latter, we argue that clumps are unlikely to reach a hydrostatic state if molecular clouds can in general be described as single-phase media with an effective polytropic exponent γe<4/3. In this case, clumps are expected to be short-lived, either proceeding directly to collapse, or else ``rebounding'' toward the mean pressure and density as the parent cloud. Rebounding clumps are delayed in their re-expansion by their self-gravity. From a simple virial theorem calculation, we find re-expansion times ~1 Myr, i.e., of the order of a few local free-fall times tfc≡LJ,c/c, where LJ,c=(πc2/Gρc)1/2 is the Jeans length at the clump's mean density ρc and c is the isothermal sound speed.

In the magnetic case, we present a series of driven-turbulence, ideal-MHD numerical simulations in which we follow the evolution of clumps and cores in relation to the magnetic criticality of their ``parent clouds'' (the numerical boxes). In subcritical boxes, magnetostatic clumps do not form. A minority of moderately gravitationally bound clumps form, which however are dispersed by the turbulence in <~1.3 Myr. An estimate of the ambipolar diffusion (AD) timescale at the physical conditions of these cores gives characteristic times >~1.3 Myr, suggesting that these few longer lived cores can marginally be ``captured'' by AD to increase their mass-to-flux ratio and eventually collapse, although on timescales not significantly longer than the dynamical ones. In supercritical boxes, some cores manage to become locally supercritical and collapse in typical timescales of 2 tfc (~1 Myr). In the most supercritical simulation, a few longer lived cores are observed, which last for up to ~3 Myr, but these end up re-expanding rather than collapsing, because they are sub-Jeans in spite of being supercritical. Fewer clumps and cores form in these simulations than in their nonmagnetic counterpart. Our results suggest the following: (1) not all cores observed in molecular clouds will necessarily form stars and that a class of ``failed cores'' should exist, which will eventually redisperse and which may be related to the observed starless cores; (2) cores may be out-of-equilibrium, transient structures, rather than quasi-magnetostatic configurations; (3) the magnetic field may help reduce the star formation efficiency by reducing the probability of core formation, rather than by significantly delaying the collapse of individual cores, even in magnetically supercritical clouds. 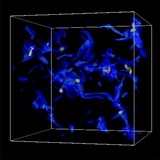