A Catalog of Northern Stars with Annual Proper Motions Larger than 0.15" (LSPM-NORTH Catalog)

The LSPM catalog is a comprehensive list of 61,977 stars north of the J2000 celestial equator that have proper motions larger than 0.15" yr-1 (local-background-stars frame). The catalog has been generated primarily as a result of our systematic search for high proper motion stars in the Digitized Sky Surveys using our SUPERBLINK software. At brighter magnitudes, the catalog incorporates stars and data from the Tycho-2 Catalogue and also, to a lesser extent, from the All-Sky Compiled Catalogue of 2.5 million stars. The LSPM catalog considerably expands over the old Luyten (Luyten Half-Second [LHS] and New Luyten Two-Tenths [NLTT]) catalogs, superseding them for northern declinations. Positions are given with an accuracy of <~100 mas at the 2000.0 epoch, and absolute proper motions are given with an accuracy of ~8 mas yr-1. Corrections to the local-background-stars proper motions have been calculated, and absolute proper motions in the extragalactic frame are given. Whenever available, we also give optical BT and VT magnitudes (from Tycho-2, ASCC-2.5), photographic BJ, RF, and IN magnitudes (from USNO-B1 catalog), and infrared J, H, and Ks magnitudes (from 2MASS). We also provide an estimated V magnitude and V-J color for nearly all catalog entries, useful for initial classification of the stars. The catalog is estimated to be over 99% complete at high Galactic latitudes (|b|>15deg) and over 90% complete at low Galactic latitudes (|b|>15deg), down to a magnitude V=19.0, and has a limiting magnitude V=21.0. All the northern stars listed in the LHS and NLTT catalogs have been reidentified, and their positions, proper motions, and magnitudes reevaluated. The catalog also lists a large number of completely new objects, which promise to expand very significantly the census of red dwarfs, subdwarfs, and white dwarfs in the vicinity of the Sun.

Based on data mining of the Digitized Sky Surveys (DSSs), developed and operated by the Catalogs and Surveys Branch of the Space Telescope Science Institute (STScI), Baltimore. Developed with support from the National Science Foundation (NSF), as part of the NASA/NSF NStars program. 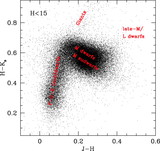