The cooling of gas in the centers of dark matter halos is expected to lead to a more concentrated dark matter distribution. The response of dark matter to the condensation of baryons is usually calculated using the model of adiabatic contraction, which assumes spherical symmetry and circular orbits. In contrast, halos in the hierarchical structure formation scenarios grow via multiple violent mergers and accretion along filaments, and particle orbits in the halos are highly eccentric. We study the effects of the cooling of gas in the inner regions of halos using high-resolution cosmological simulations that include gas dynamics, radiative cooling, and star formation. We find that the dissipation of gas indeed increases the density of dark matter and steepens its radial profile in the inner regions of halos compared to the case without cooling. For the first time, we test the adiabatic contraction model in cosmological simulations and find that the standard model systematically overpredicts the increase of dark matter density in the inner 5% of the virial radius. We show that the model can be improved by a simple modification of the assumed invariant from M(r)r to M(r)r, where r and r are the current and orbit-averaged particle positions. This modification approximately accounts for orbital eccentricities of particles and reproduces simulation profiles to within 10%-20%. We present analytical fitting functions that accurately describe the transformation of the dark matter profile in the modified model and can be used for interpretation of observations. 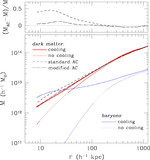