We present the analysis and interpretation of an observation of the flare star AD Leo (dM3e) with the Low Energy Transmission Grating of Chandra. The high-resolution X-ray spectrum-dominated by emission lines from O VII-VIII, Ne IX-X, and Fe XVII-Fe XIX-allowed us to infer the plasma emission measure distribution (EMD) versus temperature, as well as the abundances of individual elements in the corona of this magnetically active star, during a typical state characterized by significant variability but no evident flaring event. We have also measured plasma densities at various temperatures using spectroscopic diagnostics provided by He-like triplets and Fe XXI lines. We show that the present EMD is similar, in terms of overall shape and temperature of the peak, to those previously obtained from Extreme Ultraviolet Explorer (EUVE) spectra during quiescent and flaring states confirming the long-term stability of the corona of AD Leo. At variance with the case of other active stars, the EMD of AD Leo is characterized by a significantly shallower slope, compatible with that predicted by static models of isobaric loops with constant cross section and uniform heating. We discuss such coronal modeling to infer the average properties of the corona in terms of loop populations, including estimates of the surface filling factor derived by comparison between the model and the observed EMD. We also show that the EMD is compatible with the model of a corona continuously heated by flares, which predicts an EMD slope slightly steeper than observed, but that can be accommodated by observational uncertainties. The coronal composition is such that the element abundances, relative to solar values, tend to increase with the first ionization potential, with few exceptions. The line-to-continuum ratios suggest a nearly solar metallicity, a result difficult to reconcile with previous determinations based on global fitting of X-ray spectra. 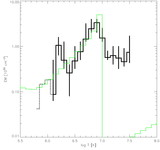