The Trifid Nebula, a young star-forming H II region, was observed for 16 hr by the ACIS-I detector on board the Chandra X-Ray Observatory. We detected 304 X-ray sources, 30% of which are hard sources and 70% of which have near-infrared counterparts. Chandra resolved the HD 164492 multiple system into a number of discrete X-ray sources. X-ray emission is detected from components HD 164492A (an O7.5 III star that ionizes the nebula), B and C (a B6 V star), and possibly D (a Be star). Component C is blended with an unidentified source to the northwest. HD 164492A has a soft spectrum (kT~0.5 keV), while the component C blend shows much harder emission (kT~6 keV). This blend and other hard sources are responsible for the hard emission and Fe K line seen by ASCA, which was previously attributed entirely to HD 164492A. The soft spectrum of the O star is similar to emission seen from other single O stars and is probably produced by shocks within its massive stellar wind. Lack of hard emission suggests that neither a magnetically confined wind shock nor colliding wind emission is important in HD 164492A. A dozen stars are found to have flares in the field, and most of them are pre-main-sequence stars (PMS). Six sources with flares have both optical and Two Micron All Sky Survey counterparts. These counterparts are not embedded, and thus it is likely that these sources are in a later stage of PMS evolution, possibly Class II or III. Two flare sources did not have any near-IR, optical, or radio counterparts. We suggest that these X-ray flare stars are in an early PMS stage (Class I or earlier). We also detected X-ray sources apparently associated with two massive star-forming cores, TC 1 and TC 4. The spectra of these sources show high extinction and X-ray luminosities of (2-5)×1031 ergs s-1. If these sources are Class 0 objects, it is unclear whether their X-ray emission is due to solar-type magnetic activities, as in Class I objects, or to some other mechanism. 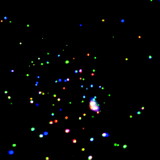