The frequency of giant arcs-highly distorted and strongly gravitationally lensed background galaxies-is a powerful test for cosmological models. Previous comparisons of arc statistics for the currently favored concordance cosmological model (lambda cold dark matter [LCDM]) with observations have shown an apparently large discrepancy in underpredicting cluster arcs. We present new ray-shooting results, based on a high-resolution (10243 particles in a 320 h-1 Mpc box) large-scale structure simulation normalized to the Wilkinson Microwave Anisotropy Probe (WMAP) observations. We follow light rays through a pseudo-three-dimensional matter distribution approximated by up to 38 lens planes and evaluate the occurrence of arcs for various source redshifts. We find that the frequency of strongly lensed background galaxies is a steep function of source redshift: the optical depth for giant arcs increases by a factor of 5 when background sources are moved from redshift zs=1.0 to 1.5. This is a consequence of a small decrease of the critical surface mass density for lensing, combined with the very steep cluster mass function at the high-mass end plus a modest contribution from secondary lens planes. Our results are consistent with those of Bartelmann et al. if we-as they did-restrict all sources to be at zs=1. If we allow sources extending to or beyond zs>=1.5, the apparent discrepancy vanishes: the frequency of arcs increases by about a factor of 10 as compared to previous estimates, and results in roughly one arc per 20 deg2 over the sky, in good agreement with the observed frequency of arcs. 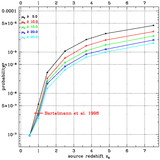