We present Keck Long Wavelength Spectrometer images of the Orion BN/KL star-forming region obtained in the first multiwavelength study to have 0.3"-0.5" resolution from 4.7 to 22 μm. The young stellar objects designated infrared source n and radio source I are believed to dominate the BN/KL region. We have detected extended emission from a probable accretion disk around source n but infer a stellar luminosity on the order of only 2000 Lsolar. Although source I is believed to be more luminous, we do not detect an infrared counterpart even at the longest wavelengths. However, we resolve the close-by infrared source, IRc2, into an arc of knots ~103 AU long at all wavelengths. Although the physical relation of source I to IRc2 remains ambiguous, we suggest that these sources mark a high-density core (107-108 pc-3 over ~103 AU) within the larger BN/KL star-forming cluster. The high density may be a consequence of the core being young and heavily embedded. We suggest that the energetics of the BN/KL region may be dominated by this cluster core rather than one or two individual sources. 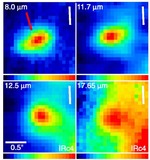