The H92α recombination line was observed toward six massive star formation regions (MSFRs), and the H76α line was observed toward one MSFR. All seven MSFRs were suspected of harboring hypercompact (HC) H II regions. The goal was to detect broad-line sources and to investigate their properties. The sources were selected according to their small sizes, high brightness temperatures, and rising continuum spectra (typical spectral index α~+1, Sν~να) at centimeter wavelengths. Two of the HC H II candidates, G25.5+0.2 and NGC 7538 (IRS 1), were previously known to have extremely broad lines (line widths of 160 and 180 km s-1, respectively). Sixteen separate, compact, radio continuum components were detected, fourteen of which were detected in either the H92α or H76α line. Eight sources have line widths (FWHMs) greater than 40 km s-1 typical ultracompact (UC) H II region line widths are 25-30 km s-1. These broad lines may be produced by a combination of thermal, turbulent, and electron impact broadening, and large-scale motions (rotation, expansion, jets, shocks, inflow, disk, etc.). On the basis of one line and a relatively low spatial resolution, we are unable to determine the relative contributions from each mechanism. All the MSFRs in the current sample are composed of two or more continuum components. The large projected separations between the continuum components within a given MSFR indicate that they are unlikely to be gravitationally bound massive protostars. Possible origins of the observed intermediate-sloped power-law spectral energy distributions (SEDs) are discussed. It is suggested that hierarchal clumping in HC H II regions may produce the observed power-law SEDs. 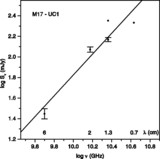