We develop a general method for analyzing the light curves of microlensed quasars and apply it to the OGLE light curves of the four-image lens Q2237+0305. We simultaneously estimate the effective source velocity, the average stellar mass, the stellar mass function, and the size and structure of the quasar accretion disk. The light curves imply an effective source-plane velocity of 10,200kms-1<~veh<M/Msolar>-1/2<~39,600 km s-1 (68% confidence). Given an independent estimate for the source velocity, found by combining estimates for the peculiar velocity of the lens galaxy with its measured stellar velocity dispersion, we obtain a mean stellar mass of <M>~=0.037 h2 Msolar (0.0059h2Msolar<~<M><~0.20h2Msolar). We were unable to distinguish a Salpeter mass function from one in which all stars had the same mass, but we do find a strong lower bound of κ*/κ>~0.5 on the fraction of the surface mass density represented by the microlenses. Our models favor a standard thin accretion disk model as the source structure over a simple Gaussian source. For a face-on, thin disk radiating as a blackbody with temperature profile Ts~R-3/4, the radius rs where the temperature matches the filter pass band [2000 Å or Ts(rs)~=7×104 K] is 1.4×1015h-1cm<~rs<~4.5×1015h-1cm. The flux predicted by the disk model agrees with the observed flux of the quasar, so nonthermal or optically thin emission processes are not required. From the disk structure we estimate a black hole mass of MBH~=1.1+1.4-0.7×109h-3/2η1/20.1(L/LE)-1/2Msolar, consistent with the mass estimated under the assumption that the quasar is radiating at the Eddington luminosity (L/LE=1). 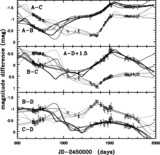