We have assembled a database of stars having both masses determined from measured orbital dynamics and sufficient spectral and photometric information for their placement on a theoretical H-R diagram. Our sample consists of 115 low-mass (M<2.0 Msolar) stars, 27 pre-main-sequence and 88 main-sequence. We use a variety of available pre-main-sequence evolutionary calculations to test the consistency of predicted stellar masses with dynamically determined masses. Despite substantial improvements in model physics over the past decade, large systematic discrepancies still exist between empirical and theoretically derived masses. For main-sequence stars, all models considered predict masses consistent with dynamical values above 1.2 Msolar and some models predict consistent masses at solar or slightly lower masses, but no models predict consistent masses below 0.5 Msolar, with all models systematically underpredicting such low masses by 5%-20%. The failure at low masses stems from the poor match of most models to the empirical main sequence below temperatures of 3800 K, at which molecules become the dominant source of opacity and convection is the dominant mode of energy transport. For the pre-main-sequence sample we find similar trends. There is generally good agreement between predicted and dynamical masses above 1.2 Msolar for all models. Below 1.2 Msolar and down to 0.3 Msolar (the lowest mass testable), most evolutionary models systematically underpredict the dynamically determined masses by 10%-30%, on average, with the Lyon group models predicting marginally consistent masses in the mean, although with large scatter. Over all mass ranges, the usefulness of dynamical mass constraints for pre-main-sequence stars is in many cases limited by the random errors caused by poorly determined luminosities and especially temperatures of young stars. Adopting a warmer-than-dwarf temperature scale would help reconcile the systematic pre-main-sequence offset at the lowest masses, but the case for this is not compelling, given the similar warm offset at older ages between most sets of tracks and the empirical main sequence. Over all age ranges, the systematic discrepancies between track-predicted and dynamically determined masses appear to be dominated by inaccuracies in the treatment of convection and in the adopted opacities. 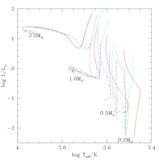