Toward a Deterministic Model of Planetary Formation. I. A Desert in the Mass and Semimajor Axis Distributions of Extrasolar Planets

In an attempt to develop a deterministic theory for planet formation, we examine the accretion of cores of giant planets from planetesimals, gas accretion onto the cores, and their orbital migration. We adopt a working model for nascent protostellar disks with a wide variety of surface density distributions in order to explore the range of diversity among extrasolar planetary systems. We evaluate the cores' mass growth rate Mc through runaway planetesimal accretion and oligarchic growth. The accretion rate of cores is estimated with a two-body approximation. In the inner regions of disks, the cores' eccentricity is effectively damped by their tidal interaction with the ambient disk gas and their early growth is stalled by ``isolation.'' In the outer regions, the cores' growth rate is much smaller. If some cores can acquire more mass than a critical value of several Earth masses during the persistence of the disk gas, they would be able to rapidly accrete gas and evolve into gas giant planets. The gas accretion process is initially regulated by the Kelvin-Helmholtz contraction of the planets' gas envelope. Based on the assumption that the exponential decay of the disk gas mass occurs on the timescales ~106-107 yr and that the disk mass distribution is comparable to those inferred from the observations of circumstellar disks of T Tauri stars, we carry out simulations to predict the distributions of masses and semimajor axes of extrasolar planets. In disks as massive as the minimum-mass disk for the solar system, gas giants can form only slightly outside the ``ice boundary'' at a few AU. However, cores can rapidly grow above the critical mass inside the ice boundary in protostellar disks with 5 times more heavy elements than those of the minimum-mass disk. Thereafter, these massive cores accrete gas prior to its depletion and evolve into gas giants. The limited persistence of the disk gas and the decline in the stellar gravity prevent the formation of cores capable of efficient gas accretion outside 20-30 AU. Unimpeded dynamical accretion of gas is a runaway process that is terminated when the residual gas is depleted either globally or locally in the form of a gap in the vicinity of their orbits. Since planets' masses grow rapidly from 10 to 100 M⊕, the gas giant planets rarely form with asymptotic masses in this intermediate range. Our model predicts a paucity of extrasolar planets with mass in the range 10-100 M⊕ and semimajor axis less than 3 AU. We refer to this deficit as a ``planet desert.'' We also examine the dynamical evolution of protoplanets by considering the effect of orbital migration of giant planets due to their tidal interactions with the gas disks, after they have opened up gaps in the disks. The effect of migration is to sharpen the boundaries and to enhance the contrast of the planet desert. It also clarifies the separation between the three populations of rocky, gas giant, and ice giant planets. Based on our results, we suggest that the planets' mass versus semimajor axes diagram can provide strong constraints on the dominant formation processes of planets analogous to the implications of the color-magnitude diagram on the paths of stellar evolution. We show that the mass and semimajor axis distributions generated in our simulations for the gas giants are consistent with those of the known extrasolar planets. Our results also indicate that a large fraction (90%-95%) of the planets that have migrated to within 0.05 AU must have perished. Future observations can determine the existence and the boundaries of the planet desert in this diagram, which can be used to extrapolate the ubiquity of rocky planets around nearby stars. Finally, the long-term dynamical interaction between planets of various masses can lead to both eccentricity excitation and scattering of planets to large semimajor axes. These effects are to be included in future models. 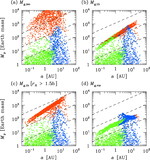