Solar flare energy manifestations were believed to be the result of the same kind of particle acceleration. It is generally accepted that a population of relativistic electrons accelerated during the impulsive phase of solar flares produces microwaves by synchrotron losses in the solar magnetic field and X-rays by collisions in denser regions of the solar atmosphere. We report the discovery of a new intense solar flare spectral radiation component, peaking somewhere in the shorter submillimeter to far-infrared range, identified during the 2003 November 4 large flare. The new solar submillimeter telescope, designed to extend the frequency range to above 100 GHz, detected this new component with increasing fluxes between 212 and 405 GHz. It appears along with, but is separated from, the well-known gyrosynchrotron emission component seen at microwave frequencies. The novel emission component had three major peaks with time, originated in a compact source whose position remained remarkably steady within 15". Intense subsecond pulses are superposed with excess fluxes also increasing with frequency and amplitude increasing with the pulse repetition rate. The origin of the terahertz emission component during the flare impulsive phase is not known. It might be representative of emission due to electrons with energies considerably larger than the energies assumed to explain emission at microwaves. This component can attain considerably larger intensities in the far-infrared, with a spectrum extending to the white-light emission observed for that flare. 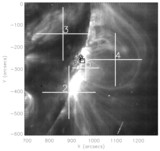