The Extragalactic Origin of the Arcturus Group

We reanalyze the group of stars associated kinematically with Arcturus and confirm that they constitute a peculiar grouping of metal-poor stars with similar apocentric radius, common angular momentum, and distinct metal abundance patterns. These properties are consistent with those expected for a group of stars originating from the debris of a disrupted satellite. The Arcturus group stands out clearly in the catalog of Beers et al. and in other compilations of metal-poor stars in the solar neighborhood. Its angular momentum appears too low to arise from dynamiperturbations induced by the Galactic bar and coincides with that of the kinematically peculiar population of stars identified above and below the Galactic plane by Gilmore, Wyse, & Norris: the Arcturus group is in all likelihood the solar neighborhood extension of such population. Further analysis is needed to confirm our proposal that Arcturus, together with some of the brightest stars in the night sky, may have formed beyond the confines of the Galaxy. However, validating the extragalactic origin of the Arcturus group would lend support to the prevalence of accretion events envisioned in hierarchimodels of galaxy formation and would suggest that early mergers may have contributed a substantial fraction of the old and metal-deficient stars in the Galactic disk. 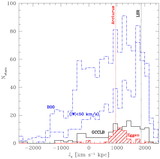