We describe a possible new class of X-ray sources that have robust detections in ultradeep Chandra data yet have no detections at all in our deep multiband Great Observatories Origins Deep Survey Hubble Space Telescope Advanced Camera for Surveys (ACS) images, which represent the highest quality optical imaging obtained to date on these fields. These extreme X-ray/optical ratio sources (EXOs) have values of FX/Fopt at least an order of magnitude above those generally found for other active galactic nuclei (AGNs), even those that are harbored by reddened hosts. We thus infer two possible scenarios: (1) if these sources lie at redshifts z<~6, then their hosts need to be exceedingly underluminous or more reddened, compared with other known sources, or (2) if these sources lie above z~6-7, such that even their Lyα emission is redshifted out of the bandpass of our ACS z850 filter, then their optical and X-ray fluxes can be accounted for in terms of relatively normal ~L* hosts and moderate-luminosity AGNs.

Based on observations obtained with the NASA/ESA Hubble Space Telescope, which is operated by the Association of Universities for Research in Astronomy (AURA), Inc., under NASA contract NAS5-26555. 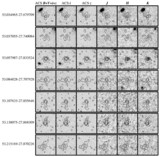