We report the first measurements of anisotropy in the cosmic microwave background (CMB) radiation with the Arcminute Cosmology Bolometer Array Receiver (ACBAR). The instrument was installed on the 2.1 m Viper telescope at the South Pole in 2001 January; the data presented here are the product of observations up to and including 2002 July. We present two deep differential maps produced by subtracting leading and trailing observations from the main field. The differential maps cover approximately 24 deg2 of sky selected for low dust contrast. These results represent the highest signal-to-noise ratio observations of CMB anisotropy to date; in the deepest 150 GHz band map, we reached an rms of ~8.0 μK per 5' beam. The 3° extent of the maps and small beam size of the experiment allow the measurement of the CMB anisotropy power spectrum over the range l=150-3000 with resolution of Δl=150. The contributions of galactic dust and radio sources to the observed anisotropy are negligible and are removed in the analysis. The resulting power spectrum is found to be consistent with the primary anisotropy expected in a concordance ΛCDM universe. 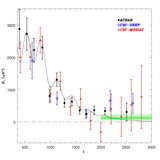