The Size Distribution of Trans-Neptunian Bodies

We search 0.02 deg2 of the invariable plane for trans-Neptunian objects (TNOs) 25 AU or more distant using the Advanced Camera for Surveys (ACS) aboard the Hubble Space Telescope. With 22 ks per pointing, the search is more than 50% complete for m606W<=29.2. Three new objects are discovered, the faintest with mean magnitude m=28.3 (diameter ~25 km), which is 3 mag fainter than any previously well-measured solar system body. Each new discovery is verified with a follow-up 18 ks observation with the ACS, and the detection efficiency is verified with implanted objects. The three detections are a factor of ~25 less than would be expected under extrapolation of the power-law differential sky density for brighter objects, Σ(m)≡dN/dmdΩ~10αm with α~0.63. Analysis of the ACS data and recent TNO surveys from the literature reveals departures from this power law at both the bright and faint ends. Division of the TNO sample by distance and inclination into ``classical Kuiper belt'' (CKB) and ``Excited'' samples reveals that Σ(m) differs for the two populations at 96% confidence, and both samples show departures from power-law behavior. A double power-law Σ(m) adequately fits all data. Implications of these departures include the following: (1) The total mass of the ``classical'' Kuiper belt is ~0.010 M⊕, only a few times Pluto's mass, and is predominantly in the form of ~100 km bodies (barring a secondary peak in the mass distribution at sub-10 km sizes). The mass of Excited objects is perhaps a few times larger. (2) The Excited class has a shallower bright-end magnitude (and, presumably, size) distribution; the largest objects, including Pluto, make up tens of percent of the total mass whereas the largest CKB objects are only ~2% of its mass. (3) The derived size distributions predict that the largest Excited body should be roughly the mass of Pluto, and the largest CKB body should have mR~20-hence, Pluto is feasibly considered to have originated from the same physical process as the Excited TNOs. (4) The observed deficit of small TNOs occurs in the size regime where present-day collisions are expected to be disruptive, suggesting extensive depletion by collisions. The Excited and CKB size distributions are qualitatively similar to some numerical models of growth and erosion, with both accretion and erosion appearing to have proceeded to more advanced stages in the Excited class than in the CKB. (5) The lack of detections of distant TNOs implies that if a mass of TNOs comparable to the CKB is present near the invariable plane beyond 50 AU, that distant population must be composed primarily of bodies smaller than ~40 km. (6) There are too few small CKB objects for this population to be the reservoir of Jupiter-family comet precursors without a significant upturn in the population at diameters under 20 km. With optimistic model parameters and extrapolations, the Excited population could be the source reservoir. Implications of these discoveries for the formation and evolution of the outer solar system are discussed.

Based on observations made with the NASA/ESA Hubble Space Telescope, obtained at the Space Telescope Science Institute, which is operated by the Association of Universities for Research in Astronomy, Inc., under NASA contract NAS 5-26555. These observations are associated with program GO-9433. 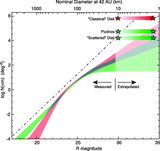