We have compiled L' (3.4-4.1 μm) and M' (4.6-4.8 μm) photometry of 63 single and binary M, L, and T dwarfs obtained at the United Kingdom Infrared Telescope using the Mauna Kea Observatory filter set. This compilation includes new L' measurements of eight L dwarfs and 13 T dwarfs and new M' measurements of seven L dwarfs, five T dwarfs, and the M1 dwarf Gl 229A. These new data increase by factors of 0.6 and 1.6, respectively, the numbers of ultracool dwarfs (Teff<~2400 K) for which L' and M' measurements have been reported. We compute Lbol, BCK, and Teff for 42 dwarfs whose flux-calibrated JHK spectra, L' photometry, and trigonometric parallaxes are available, and we estimate these quantities for nine other dwarfs whose parallaxes and flux-calibrated spectra have been obtained. BCK is a well-behaved function of near-infrared spectral type with a dispersion of ~0.1 mag for types M6-T5 it is significantly more scattered for types T5-T9. Teff declines steeply and monotonically for types M6-L7 and T4-T9, but it is nearly constant at ~1450 K for types L7-T4 with assumed ages of ~3 Gyr. This constant Teff is evidenced by nearly unchanging values of L'-M' between types L6 and T3. It also supports recent models that attribute the changing near-infrared luminosities and spectral features across the L-T transition to the rapid migration, disruption, and/or thinning of condensate clouds over a narrow range of Teff. The L' and M' luminosities of early-T dwarfs do not exhibit the pronounced humps or inflections previously noted in the I through K bands, but insufficient data exist for types L6-T5 to assert that ML' and MM' are strictly monotonic within this range of types. We compare the observed K, L', and M' luminosities of L and T dwarfs in our sample with those predicted by precipitating-cloud and cloud-free models for varying surface gravities and sedimentation efficiencies. The models indicate that the L3-T4.5 dwarfs generally have higher gravities (logg=5.0-5.5) than the T6-T9 dwarfs (logg=4.5-5.0). The predicted M' luminosities of late-T dwarfs are 1.5-2.5 times larger than those derived empirically for the late-T dwarfs in our sample. This discrepancy is attributed to absorption at 4.5-4.9 μm by CO, which is not expected under the condition of thermochemical equilibrium assumed in the models. Our photometry and bolometric calculations indicate that the L3 dwarf Kelu-1 and the T0 dwarf SDSS J042348.57-041403.5 are probable binary systems. We compute log(Lbol/Lsolar)=-5.73+/-0.05 and Teff=600-750 K for the T9 dwarf 2MASSI J0415195-093506, which supplants Gl 570D as the least luminous and coolest brown dwarf presently known. 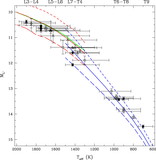