We study the properties of dark matter (DM) halos in several models in which we have included dark energy (DE). We consider both dynamical DE, due to a scalar field self-interacting through Ratra-Peebles or supergravity potentials, and DE with constant negative w=p/ρ>-1. We find that at zero redshift, both the nonlinear power spectrum of DM and the mass function of halos do not depend appreciably on the state equation of DE, which implies that both statistics are almost indistinguishable from those of Λ-dominated cold dark matter (ΛCDM). This result is consistent with the nonlinear treatment in the accompanying paper and is also a welcome feature, because ΛCDM fits a large variety of data. On the other hand, DE halos differ from ΛCDM halos in that they are denser in their central parts, because DE halos collapsed earlier. Nevertheless, such differences are not so large. For example, the density at 10 kpc of a ~1013 Msolar DE halo is only 50% denser than the ΛCDM halo. This means that DE does not ease the problem with cuspy DM profiles. Addressing another cosmological problem, the abundance of subhalos, we find that the number of satellites of halos in various DE models does not change with respect to ΛCDM when normalized to the same circular velocity as the parent halo. Most of the above similarities are related to choosing for all models the same normalization factor σ8 at z=0. At high redshifts, different DE and ΛCDM models have different amplitudes of fluctuations, which causes substantial deviations of halo properties to occur. Therefore, the way to find which DE equation of state gives the best fit to the observed universe is to look at the evolution of halo properties. For example, the abundance of galaxy groups with mass larger than 1013 h-1 Msolar at z>~2 can be used to discriminate between the models and thus to constrain the nature of DE. 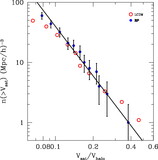