First Evidence of Dusty Disks around Herbig Be Stars

We have carried out a high-sensitivity search for circumstellar disks around Herbig Be stars in the continuum at 1.4 and 2.7 mm using the IRAM interferometer at the Plateau de Bure. In this Letter, we report data on three well-studied B0 stars: MWC 1080, MWC 137, and R Mon. The two latter have also been observed in the continuum at 0.7 and 1.3 cm using the NRAO Very Large Array. We report the detection of circumstellar disks around MWC 1080 and R Mon with masses of Md~0.003 and 0.01 Msolar, respectively, while for MWC 137 we estimate a disk mass upper limit of 0.007 Msolar. Our results show that the ratio Md/M* is at least an order of magnitude lower in Herbig Be stars than in Herbig Ae and T Tauri stars. 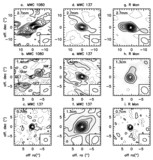